We chose this name because of the programme’s mission to not only be about the ‘individual’ but about whole communities, and to overcome the stereotype of young people not being concerned about the bigger picture of their local and global communities.

We have been very busy 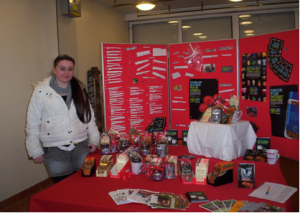 setting up 2 new Not Just Us youth enterprise groups. Laura has been working with a group of 10 young people in Leeds and Jo has been working with a women’s group in Doncaster. The Doncaster group was launched at the beginning of February in partnership with Platform 51. This is a women’s group with 9 members who are all from the most deprived wards of Doncaster and are not in employment, education or training (NEET). The Leeds group began in January and is made up of 10 young people from different neighbourhoods in Leeds. Our Huddersfield pilot group – known as the Young Ethical Pioneers – is still going strong and has recently acquired two new members!

Over the last few months the Not Just Us froup members have been working hard to learn about ethical trade and business approaches that benefit whole communities. They have been running events in their communities to raise awareness about the plight of smallholders in developing countries and promote the idea of ‘ethical purchasing’. 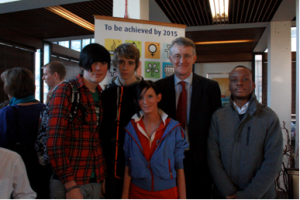 During fair trade fortnight the groups were busy and running community events; the Doncaster group sold ethical goods in the Corn Exchange of Doncaster market, and they helped to organise a showing of the film ‘Black Gold’ at a local theatre.  The Leeds group ran ethical food stalls at Hillside Enterprise centre in Beeston and at Leeds Met University. Both groups appeared on their local radios – SINE FM in Doncaster and South Leeds Community Radio – to talk about their enterprising activities.

In April some of the young people had the opportunity to go away to the Lake District on a fantastic residential with Leeds Development Education Centre, and during this weekend they took part in a whole range of activities on trade justice issues and workshops on ethical trading. They had a guest speaker visit them, LYF volunteer Damian Grumpy Mule who ran a workshop on ethical products. 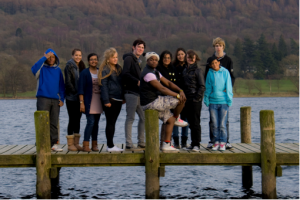 Not Just Us Doncaster were invited to attend a civic reception to welcome Archbishop of York to South Yorkshire. 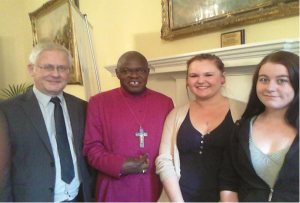 Dr John Sentamu was received in Doncaster and all involved aimed to give the Archbishop an idea of some the issues affecting people’s lives in the Diocese. Our NJU group members – Jade Deuchar and Mary Bogusowski (pictured) chatted to the Archbishop about how they are developing their very own enterprise whilst receiving support from The Lorna Young Foundation and our partners – Platform 51. Mary said of the event: “We enjoyed meeting the Archbishop.  It gave us the chance to discuss our work and he was genuinely interested.  We were also really happy that we were one of the only groups asked to represent the community sector in Doncaster at the reception”