Not Just Us residential in the Lake District with Leeds DEC 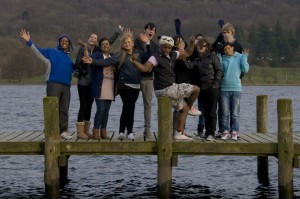 Thanks to Leeds DEC, last month the Not Just Us teams in Leeds and Huddersfield were given the fantastic opportunity to spend the weekend in the Lake district learning about social justice issues and ethical trading. Here is a reflection of some of their adventures.

On March 18th, 11 budding young ethical entrepreneurs piled into a mini bus and were driven 3 hours north, far into the countryside. The trip was a collaboration between Leeds DEC and the Lorna Young Foundation – generously provided by DEC’s V project – and its result was a weekend packed with outdoor pursuits, teambuilding activities, social justice and ethical business learning – perfect for our Not Just Us members!

The location was the beautiful Kirkby-in-Furness, near Connistone water on the edge of the west Lakes and as remote as some of us had ever experienced. Leeds DEC’s Andy – youth worker and outdoor pursuits professional – had plenty of challenging activities up his sleeve, and Liz, NJU’s volunteer helped Laura to deliver the less physically demanding sessions around ethics and fair trade.

One highlight of the weekend was the guest waiting for us in the ‘break out hut’ when we arrived, (who some people mistook to be the caretaker…) and who had kindly driven up to the Lakes to deliver a session on ethical business and product development. Another highlight has to be the ‘break out hut’ itself, as most of the NJU team wrote on their evaluation forms! This was a Swedish BBQ hut, rather like a sauna with a BBQ grill in the middle and seating all round which gave us a cosy place to sit and get to know one another, play hilarious ice breaker games and take part in the training.

One outdoor activity that we will be using again was the game of ‘trade justice football’ which really succeeded in its aim of causing one team to feel injustice – so much so that they walked off the pitch in protest, a mini-revolution! And the grand finale was the amazing – some would say terrifying – tree-top adventure course, GoApe.

But I think it’s best to hear about the real highlights of the weekend from some of the NJU team themselves in their own words. Just a final thank you to Leeds DEC for this opportunity; to Andy Paxton for making the trip happen and taking charge of the driving, the food and much of the planning; Liz Smith for her help with supporting the group and delivering the sessions; and Grumpy for driving up to the Lakes on his day off, for mucking in with the washing up, and delivering his fab presentation!

First of all is JoJo, talking about her favourite workshop of the weekend – the visit from Damian ‘Grumpy’ Blackburn…

He also asked us to write two well known companies and one fair trade company and see how they contrast, after he gave us a task to make our own fair trade product and give interesting facts to sell it and to see how our product would work, my group creatively created a fair trade condom with fair trade latex and rubber including the packaging being 100% fair trade. The other group was creating a fair trade candyfloss, the sugar and the machine as being fair trade as possible.

We all really enjoyed the interesting facts that grumpy adventured in to our minds, but the most amazing part was the chance to invent our own product we enjoyed this as it made us think about what would help in a business, and what would weaken our business, also it was fun and adventurous thinking on new ideas on the spot and being put under pressure and at eh same time making it a good idea.”

And David, NJU Leeds’ newest recruit who joined the trip at the last minute and got thrown in at the deep end…

“A weekend with a group of strangers in the Lake District was not really something that I had ever thought about doing but when the opportunity came up I thought “why not”. I have to say though that the weekend was a good laugh and everybody had fun. The first encounter with the group was a typical mix of shyness and awkward silence. Thankfully this feeling didn’t last and the sharing game that we played in the hut really brought the group closer together. Never have I laughed so hard for no reason. This strange and crazy period of laughter set the tone for the next two days and sealed the groups bond as a prosperous business group (I hope).

The overall experience of the Lake District could only be described as amazing. The group worked well together and we all became closer. I can safely say that I am looking forward to working with this group of screamers, Russians and all round good people. I supposed that we will have to see how the project goes and hope that we can do some good. Either that or try not to make the world any worse with crazy ideas regarding Fair Trade contraception.“

And last but not least is our Blessing, who was causing a bit of a ruckus at 40 feet…

Well mine was when I went on Go Ape for the first time! The night before I was really excited and looking forward to it as people described it as climbing on trees like monkey. I thought to myself that sounds pretty easy.

When we got the centre I got ready to go ape! The Coordinator’s daughter who was 11 went on first and I thought if she can do it I can too! I went on the first stage and on the last part of the first stage I looked down and it was 40 feet high and I was like to the instructors I want to get down now. He said to me you can’t get down cause I’m nearly finished this wasn’t helping to me.

I asked the instructor to bring a ladder so I can get down only if they was a 40 feet ladder to come rescue me. However Andy our youth worker motivated me to keep going and he said he believed in me. Which got me to finish it off I closed my eyes and just went. Without him I think I would be still up there now until they invented a 40 feet ladder to rescue me.

On the last stage of go ape I finished of with the best scream that the Go ape team have never heard. Well I was literary scared but when I finished it I could not believe I finished it. I was proud of myself, I got certificate for the best scream and completed all the stages. I would do this again any time now with confidence!”