A Busy Month of June for our Youth Enterprise Groups

June has been a very busy month for LYFs youth enterprise groups!

Sadly, we weren’t able to bring the young Kenyan farmers to the UK, as their visas were denied (twice) by UK immigration. But in spite of the disappointment of the Kenyans not being able to take part, the groups decided to go ahead with some of the events and workshops.  The planned trips to Longley Farm, Bolling Coffee and the Cooperative Group’s farm in Goole have been put on hold whilst we appeal the Government’s decision to withhold visas. 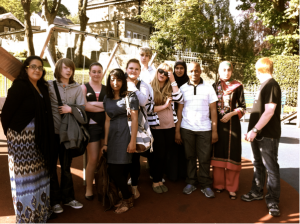 Our partners at the Fair Traders Cooperative in Holmfirth hosted the Huddersfield, Leeds and Doncaster enterprise groups for the day. The Coop’s director, Mark Lewis ran a product development workshop where the groups explored their ideas for new ethical products. They identified gaps in the existing fair trade market, and explored some of their ideas – the brilliant, bizarre and bonkers. Mark then focussed them into some serious thinking about their business, and about not only what they would like to produce but exactly how they would do it and what would seriously work; a reality check that enabled them to narrow their ideas down to a few products that they can start working on. Really exciting stuff!

Later that day a special guest visited us from the big city, branding consultant Bruce McKinnon, who spent a couple of hours with the NJU members developing their ideas for product brand names.  This was a really interesting exercise for the groups and they were very excited at being involved in the process of deciding the products’ name, logo and packaging colours. We heard some fantastic ideas; the hard part is now choosing between them!

After all the hard work – and on such a hot day – it was over to Longley Farm cafe to cool off with some delicious ice cream, and then to the park to wind down. It was pretty funny seeing 15 young adults have so much fun on playground equipment – they took over the whole place for an hour, spinning, sliding, charging around like a group of young people who’d been cooped up for too long ( and I won’t mention anything about Hayden being a bit too adventurous and getting stuck in a baby swing).

The ‘finale’ of the week that we’d hoped to have the Kenyans with us was the Huddersfield groups’ market stall. Thanks to the support of Kirklees Council the group organised a fantastic fair trade stall in Huddersfield’s indoor market’s ‘demonstration zone’. They roped their families into cooking up some delicious Caribbean and Asian food using fair trade ingredients – Goat Curry, Chicken Biriyani, Dhall – and they served it with Malawian Kilombero rice. This rice is extremely special as it is the Huddersfield’s group first ‘product’ which comes directly from the producers in Malawi. The group were able to test their rice out on the public and do some first-hand customer research.  Councillor Mehboob Khan went along to support the group and they soon had him helping out, talking to passersby and sending them into the stall to sample the food.

Our young campaigners take to the streets

Our NJU groups were invited to take part in Oxfam’s Grow campaign which launched in Leeds city centre at the beginning of this month. A few of the members from Leeds and Huddersfield went along to take part in the ‘flash-mob picnic’ in City Square during the lunchtime rush. The demo involved an hour of banging empty plates with spoons and forks to draw attention to trade injustice and world hunger. One of the countries that Oxfam is focussing the campaign on is Kenya, where one in 7 people goes hungry every day – so it was even more poignant that the Kenyan farmers were not there to take part. The young people were able to meet other trade justice campaigners on the demo, and the NJU groups and the LYF are planning to do some more work with Oxfam in the future.

Lunch with the Archbishop of Canterbury

The Kenyan farmers had been invited to Lambeth Palace by the Archbishop of Canterbury to speak at the Christian Muslim Youth Forum on Trade Justice. As Christina and Laura were in London anyway, they went along to the event to give their apologies for the Kenyans not being there, and took part in some of the workshops. They heard some very inspirational young speakers share their thoughts and experiences, and the event really confirmed the importance of trade justice education for young people – together they can make a big impact and we are pleased that our youth ethical enterprise programme is taking this education beyond the school gates.