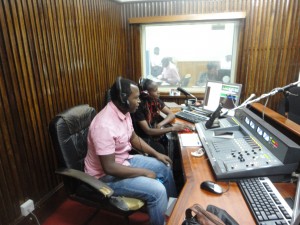 The LYF has now broadcast 27 weekly farmer radio programmes since Autumn 2011. The radio programmes are already demonstrating a significant impact. For example, smallholder farmers have already changed some of their practices in the cooperatives where the Farmer Field Listening Groups are operating – as a direct result of the SSN.

The first 2-4 programmes covered the issue of the Coffee Calendar, Coffee Crop Varieties, Yields, Weather and Pest Resistant Crops. The SSN receives atleast 20 SMS messages after each broadcast in those first few weeks. Most of the SMS asked about the Batian variety of coffee which was being marketed by the Coffee Research Institute (CRI) –  a variety which is supposed to produce greater yields, better quality and which is pest and disease resistant – particularly in relation to Coffee Berry Disease and leaf rust.  As a result of the content of the SMS messages received, the SSN decided to re-schedule the broadcast and instead, prioritise an interview with the Director of the Coffee Research Institute which would focus on the Batian coffee variety.

Immediately following this interview, the demand for Batian coffee at the CRI became so high that the CRI is now currently unable to meet the demand and has run out of seedlings altogether. Both of the coffee co-operatives involved in the Farmer Field Listening Groups also bought seedlings, which they are selling to the farmers via a credit facility.  As a result, there have been notable changes in practices in the two cooperatives. These are:

Planting of the new Batian variety:

The Gikanda cooperative has purchased 2000 Batian trees and these are being planted  by 50 farmers, with a further 8000 more being ordered. Rumukia cooperative has planted 30,000 batian trees and has ordered a further 30,000 trees. Due to these incredible increases it is anticipated that this will lead to higher yields and greater levels of resistance to disease and pests as a result.

An Increase in FEMALE Member Enrolment at both Cooperatives:

One of the key objectives behind the SSN was to increase the number of women smallholders represented within the cooperatives (the LYF’s work to empower women in this way was recently recognised by the Bill and Melinda Gates Foundation who chose the SSN as a case study of good practice in this area). Following the radio broadcasts, there have been excellent achievements in this area with;

A Marked Increase in Production at both Cooperatives

At Gikanda cooperative, production figures for the last financial year were 1 million Kgs of coffee. For this financial  year, the figure has increased to 2.7 million Kgs.

Rumukia cooperative produced 1.2 million Kgs for the last financial year and this year has reported that it has reached 3.7 million Kgs.

Given that these remarkable achievements cannot be correlated solely by the increase in membership, the figures do point to an increase in production amongst existing members. It further suggests that greater transparency on pricing (i.e. pricing information is now being broadcast via the radio programmes) is leading to more smallholders wishing to become members of those cooperatives which are actively engaged in the SSN project.

An Increase in Income for Smallholders

Coffee Management Services (CMS) which markets 34% of all coffee produced in Kenya – have confirmed to the LYF that as a direct result of the radio/ SMS initiative,  the organisation has received an increase in interest in coffee farming, more coffee seedlings planting (of the Batian Variety), improvement in the implementation of Good Agricultural Practices, increased agro-input use in order to realise increased production and a visible increase in smallholder desire for better governance within the cooperatives. The information supplied from CMS has been further corroborated by statistics which the LYF has received from both Gikanda and Rumukia cooperatives which confirms that a marked increase in income for smallholders should be seen as a direct result of (increase productivity and volumes) before the end of Year 2.

But of course, we must stress that these are just the outcomes achieved by only TWO of the cooperatives in the region, that the LYF has chosen as ‘pilot Listeners’.  Our aggregate achievements therefore – for all smallholders in the area must be magnified…thanks to the outreach capability we have harnessed via Coro FM…

To summarise, these remarkable achievements in such a small space of time – from LYF’s analysis of the SSN to date –  it seems that in particular, the programme has directly led to: